We need to refactor the way our commands work so the steps are more easily reused and developers can access the commands programmatically.

As an Integration Engineer
I want to use the Frontity commands programmatically
so that I can integrate Frontity in my CI/hosting/deploy tools.

Steps are small functions that isolate logic that can be used by one or more commands. They should do only one task. They can return either the result of that task or a promise that resolves to the result in case the task is asynchronous. They throw an error if something goes wrong.

Each step should receive the arguments it needs to execute the task. It should not receive the whole options of the command, because can be used by more than one command.

Commands wrap more steps together and can be used directly or by interfaces.

These are the commands we want to add in the short term:

They will be exported in frontity/commands (that means we have to rename the current commands.ts file to cli.ts).

Commands are async functions that resolve when all the steps are finished. They receive an options object as first parameter.

Parameters can be optional and need a default value.

When some parameter is not included, the command will check for an environment variable with the same name and the FRONTITY prefix. If it is not present, it will use the default.

All commands reside in the frontity package except dev, build and serve which are in the @frontity/core package.

Commands need to be able to communicate their internal progress to the interfaces.

This is the part I’m not 100% sure about, but maybe we could include some type of callback that it is called when steps finish.

It’s important to note that a command can execute several steps in parallel.

Interfaces provide a way for users to gather the options needed for each command and then execute those commands.

Right now we have two in mind.

The frontity package will include the CLI for now, but it’s good if we start thinking that the same commands will be used by the Admin UI as well.

The cli will prompt for the options of that command:

If an option is passed using arguments, it will be used to populate the placeholder:

Only in the case of the presence of the arg --no-prompt, the cli won’t prompt for any option and it will execute the command directly.

In that case, it will use the options provided by the arguments and it will leave the rest not defined so the command can use env variables if they are present.

Command options object properties, cli params and env variable names must be easily inferrable from each other.

This is a mixed list of issues and next features for reference. I’ll create new features for some of the items.

Agreed, this is probably quite important so that people don’t get weird surprising errors if something fails to proceed.

Commands need to be able to communicate their internal progress to the interfaces.

I think this is not necessary. For most commands it will be difficult or impossible to estimate the “true” progress e.g. because of network latencies. I think that it’s sufficient to provide the information on whether the particular action has started / finished.

This is the part I’m not 100% sure about, but maybe we could include some type of callback that it is called when steps finish.

This part is not very clear to me. I think we can accomplish the same goals using the “eventEmitter” pattern. What would be the benefit of doing passing the callback to build()?

I have started the effort to refactor the CLI to use the structure that you outlined but I am not confident that in my ability to design the steps & commands in a way that is 100% independent of the interface without significant effort.

One way that I would imagine it is to focus exclusively on the “state” and “actions” necessary to run all the commands, without any UI. This could be modeled as a MobX store, redux tree, or I guess even using frontity/connect

Yes, because the CLI is still pretty small but it will get much more complex in the future and the same logic will be reused in more places. So we need to do this now.

Don’t mind about the ink port yet, let’s reorganize the logic in reusable steps and commands first.

And don’t worry about the callback/emiter either. We can omit that part if that’s difficult. It’s not important for the user experience.

Maybe we can use a combination of EventEmitter and Promise, like this library: https://www.npmjs.com/package/event-promised

So, this API is not going to work:

But, I think it’s okay if we solve it in a “stupid” way

We can just create a single eventEmitter in a separate module and then namespace the events for each command and interface.

And then just use it wherever.
The package https://github.com/andywer/typed-emitter will also give us type safety / autocompletion for the event types that we define ourselves.

If you want to use both the event emitter and the promise you can delay the awaiting of a promise:

If you don’t want to use the event emitter, you just await the promise:

If you want to use both the event emitter and the promise you can delay the awaiting of a promise: 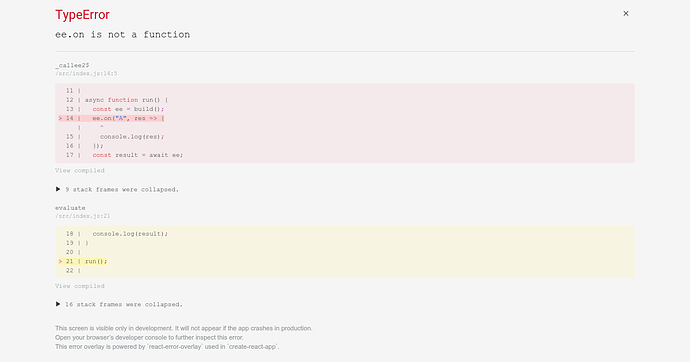 Oh, but EventPromised is already a promise, you don’t need to wrap it on a promise again

This is the corrected example:

I’d also like to talk about the testing strategy we are going to take from now with steps, commands, and interfaces. Right now we only have unit tests for steps.

I think we should either:

The problem with unit tests is that a lot of the steps are going to deal with stuff which is different in each operative system, like the file system for example. We need to have that covered, so I’d like to run the e2e tests in ubuntu, mac, and windows using GitHub actions.

We can create these tests with jest, but instead of mocking the libraries we check that the things that need to happen are actually happening. For example, something like this:

For commands maybe it’ll be enough to do unit tests and assert that the correct steps have been called:

I think we should not test the current interface because it’s going to be deprecated soon when we move everything to ink.

Once we move to ink, we can use the stdin.write method to simulate the keyboard. Then, check with mocked commands if it is calling them with the correct parameters.

For example, start the create interface with some args, simulate the keyboard entry and assert the commands:

That works, you’re right, but it’s because we made the build command to not be an async function anymore.
I guess we can just wrap the body of the build command with the event emitter and make the callback async in that case. So, like:

But to be honest, I feel like the current architecture with the eventEmitter as a singleton in a separate module is not bad. We can namespace the events for each command. This is simply what I did:

And then I can import the emitter in the create command.

For testing, I can mock the module with jest. Easy.

I think we can keep most of the unit tests that we already have. I made them work with the updated structure.

Also, we already have some tests for the commands, actually, that work in the way that you’ve described. I think they were done be Eduardo. They assert that the particular steps of the command have been called. For example:

About the tests for steps, I totally agree about also testing the tests for system differences, etc. This is probably gonna be one of main sources of pain. What I would also like to test for are things like:

About testing interfaces:
Not much to add, just

But to be honest, I feel like the current architecture with the eventEmitter as a singleton in a separate module is not bad.

Can you show me how it would be consumed by an external script or interface? Imagine for example I am a hosting and I want to control the build programmatically after a git push, and I want to show the progress of the build in my dashboard.

I think we can keep most of the unit tests that we already have. I made them work with the updated structure.

Awesome. Go ahead then

Can you show me how it would be consumed by an external script or interface? Imagine for example I am a hosting and I want to control the build programmatically after a git push, and I want to show the progress of the build in my dashboard.

I think you cannot easily

If that’s the requirement, I will just use the eventPromised instead

I think this should be the correct priority of sources of the values that we use in the CLI.
Could you check this @luisherranz ? 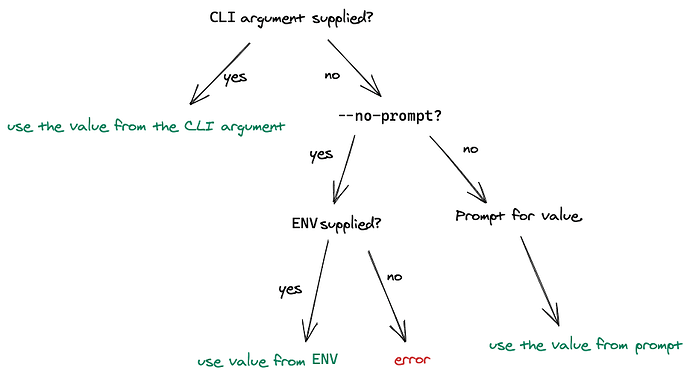 Yes, I think so too

The only thing I would add is, if there is no “ENV supplied” , I would only throw an error for required arguments (like name in frontity create) but I would use the default for the optional ones (like false for typescript in frontity create). That way people don’t need to provide all the args when they use --no-prompt. 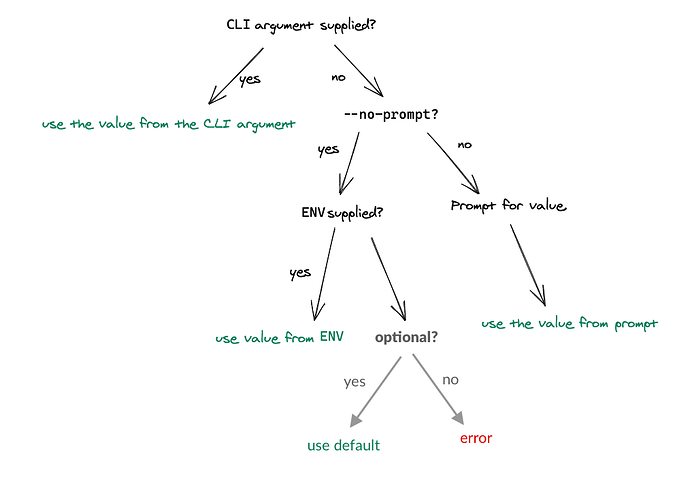 Nice graphic by the way

Nice graphic by the way

haha, using https://excalidraw.com/ for this.

if there is no “ENV supplied” , I would only throw an error for required arguments

Yes, that’s what I had in mind exactly. Thanks for clarifying.

This has been implemented in https://github.com/frontity/frontity/pull/262